The new Moto E7 Power from Motorola is the latest addition to the company’s E-series. It sits alongside the Moto E7 Plus (Review) and offers similar features, but at a lower starting price of Rs. 7,499. It competes with a lot of budget offerings such as the Poco C3, Realme C12, and Redmi 9i, to name a few. Motorola is betting on aggressive pricing, and claims that the feature set of the E7 Power is better than what the competition offers.

The big selling point for the Moto E7 Power is the 5,000mAh battery, which Morotola claims should deliver up to two full days of runtime on a single charge. There’s a USB Type-C port here too, which is an upgrade over the Moto E7 Plus, and something that isn’t commonly found in this segment. I’ve spent a little time with this new smartphone, and here are my initial impressions of it.

The Moto E7 Power is priced well under Rs. 10,000, and yet, there’s a decent set of accessories in the box including the usual data cable, a 10W power adapter, SIM eject tool, and even a silicone case. The phone is available in Tahiti Blue and Coral Red.

The frame and the back panel of the Moto E7 Power are made from a single piece of plastic, which feels sturdy. I also like the fact that the finish is matte, which means fingerprints aren’t much of an issue. The loudspeaker is at the back of the phone instead of the bottom. You get a capacitive fingerprint sensor embedded in the recessed Motorola logo on the rear, and a dual-camera module in the top left corner.

Overall, the design is pretty simple, which is not necessarily a bad thing. The Moto E7 Power is a bit on the thicker side (9.2mm) and heavy too (200g), but I haven’t found either of these things to be any real issue yet.

I like the use of different textures for the buttons on the side of the phone, which makes it easy to identify them when using the phone. The Google Assistant button is a little out of reach when holding the phone normally, but perhaps this was done intentionally in order to avoid accidental presses. The Moto E7 Power has a headphone jack on the top, and a hybrid dual-SIM tray on the left side. The phone is also IP52 rated which means it should be able to survive light splashes of water, but you still shouldn’t try submerging it in water. We’ve seen several budget phones with water-repellent coatings but few carry an official IP rating, so props to Motorola for this.

The Moto E7 Power has a dedicated button for Google Assistant

The Moto E7 Power has a large 6.5-inch HD+ IPS display with Panda glass for scratch protection. The first thing I noticed was weak viewing angles and a relatively low maximum brightness, which are typical traits of most phone displays we’ve come across in this segment. Colour reproduction is relatively decent, but I’ll save my final verdict till after I’ve used this phone for longer.

Motorola has used the MediaTek Helio G25 octa-core SoC, which we haven’t seen used in many phones, apart from the Redmi 9A and Infinix Smart 5 in this segment. Most recent smartphones in this price range have favoured the Helio G35 SoC, so it’ll be interesting to see how this compares. The Moto E7 Power’s base variant has 2GB of RAM and 32GB of storage for Rs. 7,499, while the other variant has 4GB of RAM and 64GB of storage, and is priced at Rs. 8,299. Speaking of storage, Motorola says it has used eMCP type flash storage instead of the commonly used eMMC format, which should make the interface feel a bit more responsive.

The Moto E7 Power ships with Android 10 out of the box, and hopefully should get an Android 11 update soon. Just like Nokia smartphones, you get a stock flavour of Android with absolutely no bloatware preinstalled. Surprisingly, you don’t get the Moto support app either. On other phones, this lets you set up some extra gestures and actions, although some like a double-chop action to activate the flashlight are still supported on this phone. 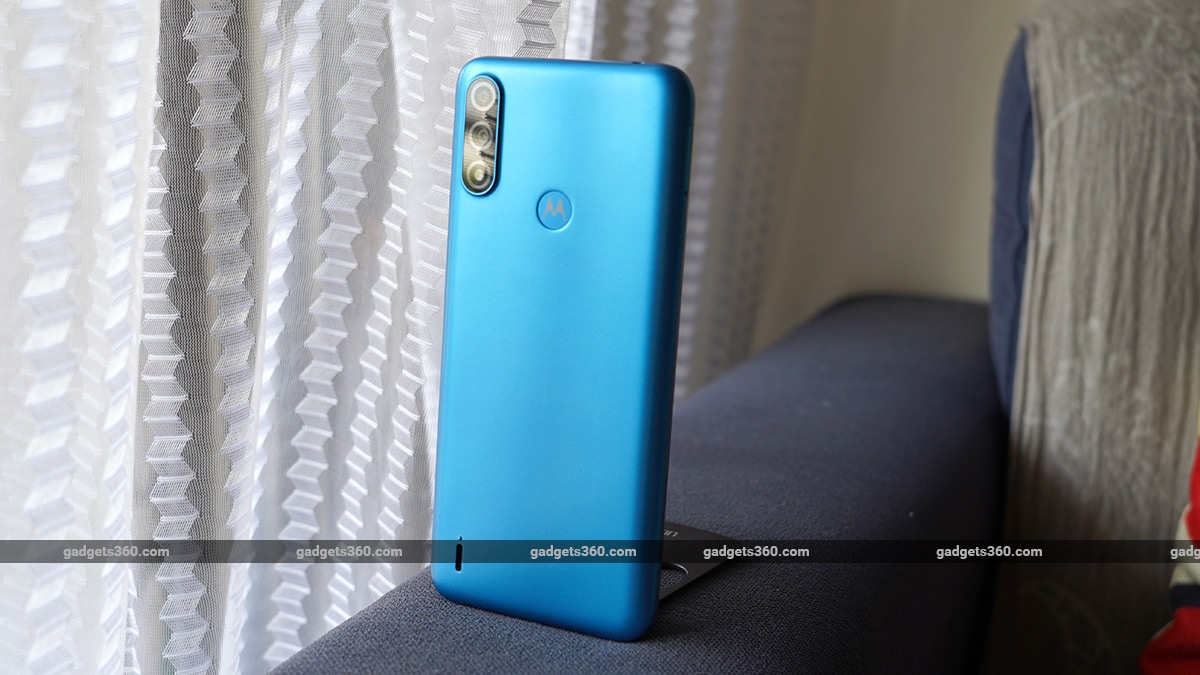 The camera system on the Moto E7 Power is also quite basic, as expected. There’s a 13-megapixel primary rear camera and a 2-megapixel macro camera. I’m not a big advocate of dedicated low-res macro cameras, but in this case, it’s still better than having just a depth sensor. There’s a 5-megapixel selfie camera with a surprising number of shooting modes, including a manual mode. Smartphones in this price segment generally don’t have very promising camera performance, so I’m not expecting that to change with the E7 Power, but you never know.

So far, the Moto E7 Power has all the makings of a solid budget offering. Do check back for the full review for my final verdict on its performance, battery life, cameras, usability, software, and more.

Is Samsung Galaxy S21+ the perfect flagship for most Indians? We discussed this on Orbital, our weekly technology podcast, which you can subscribe to via Apple Podcasts, Google Podcasts, or RSS, download the episode, or just hit the play button below.